Computers are interesting things. When we think of computers, we tend to think of general-purpose computers – our laptops, smartphones, servers and mainframes, things that run a vast array of programs composed of hundreds of thousands of instructions spanning a multitude of chips. When I was younger, general-purpose computers were more-or-less hobbyist items for home users. Single-purpose computers still exist everywhere, but there was certainly a time when having a relatively cheap, often relatively small computing device for a specific task was either preferable to doing that task on a general-purpose computer, or perhaps the only way to do it. Something like a simple four-function calculator was a far more commonplace device before our phones became more than just phones.

Chess poses an interesting problem here. By modern standards, it doesn’t take much to make a decently-performing chess computer. The computer I’ll be discussing later in this post, the Saitek Kasparov Travel Champion 21001 runs on a 10MHz processor with 1KB of RAM and 32KB of program ROM (including a large opening library). It plays at a respectable ~2000 ELO2. This was released in 1994, a time when the general-purpose computer was becoming more of a household item. The Pentium had just been released; a Micron desktop PC with a 90MHz Pentium and 8MB of RAM was selling for $2,499 (the equivalent of $4,988 in 2022, adjusting for inflation)3. 486s were still available; a less-capable but still well-kitted-out 33MHz 486 with 4MB of RAM went for $1,399 ($2,797 in 2020 dollars). Chessmaster 4000 Turbo would run on one of these 486s, albeit without making the recommended specs. It cost $59.95 ($119.85 in 2020 dollars)4, and while it’s hard to get a sense of the ELO it performed at, players today still seem to find value in all of the old Chessmaster games; they may not play at an advanced club level, but they were decent engines considering they were marketed to the general public. A more enthusiast-level software package, Fritz 3, was selling for 149 DEM5, which I can’t really translate to 2020 USD, but suffice it to say… it wasn’t cheap. Fritz 3 advertised a 2800 ELO6; a tester at the time estimated it around 2440 ELO. Interestingly, when that tester turned Turbo off, reducing their machine from a 50MHz 486 to 4.77MHz, ELO only dropped by about 100 points.

All of this is to say that capable chess engines don’t need a ton of processing power. At a time when general-purpose computers weren’t ubiquitous in the home, a low-spec dedicated chess computer made a lot of sense. The earliest dedicated home chess computers resembled calculators, lacking boards and only giving moves via an LED display, accepting them via button presses. Following this were sensory boards, accepting moves via pressure sensors under the spaces. These were available in full-sized boards as well as travel boards, the latter of which used small pegged pieces on proportionally small boards with (typically clamshell) lids for travel.

In 2022, we all have incredibly powerful computers on our desks, in our laps, and in our purses. Stockfish 15, one of the most powerful engines available, is free open source software. Chess.com is an incredible resource even at the free level, powered by the commercially-available Komodo engine. Full-size electronic boards still exist, which can interface with PCs or dedicated chess computers. Some of these products are pretty neat – DGT makes boards that recognize every piece and Raspberry Pi-based computers built into chess clocks. There is an undying joy in being able to play an AI (or an online opponent) on a real, physical, full-sized board.

The market for portable chess computers has pretty much dried up, however. Pegboard travel sets eventually gave way to LCD handhelds with resistive touchscreens and rather janky segment-based piece indicators. These were more compact than the pegboards, and they required less fiddling7 and setup. The advent of the smartphone, however, really made these into relics; a good engine on even the lowest-end modern phone is just a better experience in every single way. On iOS, tChess powered by the Stobor engine is a great app at the free level, and its pro features are well-worth the $8 asking price. The aforementioned chess.com app is excellent as well.

When I was quite young, I improved my chess skills by playing on a 1985 Novag Piccolo that my parents got me at a local flea market. I loved this pegboard-based computer – the sensory board which indicated moves via rank-and-file LEDs, the minimalist set of button inputs, even the company’s logo. It was just a cool device. It is, of course, a pretty weak machine. Miniaturization and low-power chips just weren’t at the state that they are now, and travel boards suffered significantly compared to their full-sized contemporaries. The Piccolo has been user rated around 900 ELO, it doesn’t know things like threefold repetition, and lacks opening books.

I’ve been trying to get back into chess, and I decided that I wanted a pegboard chess computer. Even though the feeling pales in comparison to a full-sized board, I don’t have a ton of space, I tend to operate out of my bed, and I have that nostalgic itch for something resembling my childhood Novag. Unfortunately, things didn’t improve much beyond the capabilities of said Novag during the pegboard era. I would still love to find one of the few decent pegboard Novags – the Amber or Amigo would be nice finds. But I ended up getting a good deal on a computer I had done some research on, the aforementioned Saitek Kasparov Travel Champion 2100 (from hereon simply referred to as the 2100).

I knew the 2100 was a decent little computer with a near-2000 ELO8 and a 6000 half-move opening library. I liked that it offered both a rank-and-file LED readout and a coordinate readout on its seven-segment LCD. Knowing that these pegboard computers struggled to achieve parity with their full-sized counterparts, I was pretty surprised to find some above-and-beyond features that I was familiar with from PC chess engines. The LCD can show a wealth of information, including a continuous readout of what the computer thinks the best move is. A coaching mode is present, where the computer will warn you when pieces are under attack and notify you if it believes you’ve made a blunder. A random mode is present, choosing the computer’s moves randomly from its top handful of best options instead of always choosing what it believes is the best of the best. You can select from themed opening books or disable the opening library entirely. These are all neat features that I really wasn’t expecting from a pegboard computer9.

I can see why the 2100 tends to command a high price on the secondary market – if you want a traditional pegboard chess computer, it seems like a hard one to beat. I’m certainly intrigued by some of the modern solutions – the roll-up Square Off PRO looks incredibly clever10. But for a compact yet tactile solution that I can tune down to my current skill level or allow to absolutely blast me, the 2100 checks a lot of unexpected boxes. As I mentioned, these travel units died out for good reason; I can play a quick game on chess.com against Komodo and get an incredibly detailed, plain-language analysis afterword that highlights key moments and lets me play out various ‘what if?’ scenarios. I do this nearly every day as of late. Purchasing a nearly-three-decade-old chess computer may have been a silly move. But it’s a different experience compared to poking at at an app on my phone. It’s tactile, it’s uncluttered. It’s scaled down, but there’s still something about just staring at a board and moving pieces around. I still use my phone more, but the 2100 offers something different, and it offers that alongside a decent engine with a flexible interface11. Maybe one of these days someone will come out with a travel eboard, but I doubt it. Solutions like the Square Off PRO are likely the direction portable chess computers are headed. This is fine, it’s a niche market. I’m just glad a handful of decent models were produced during the pegboard era, and I’m happy to have acquired the Saitek Kasparov Travel Champion 2100. 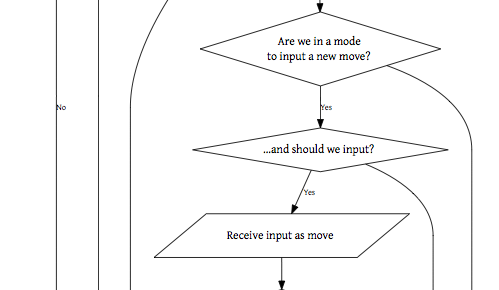 Couple of minor developments on the scorch front. First, I have a rough flowchart whipped up. There are likely flaws in this chart, but I wanted to quickly get my thoughts diagrammed out. PDF, or Graphviz/DOT.

I've thought a lot in the past about correspondence chess, and the current state of such. There are a number of online solutions, most of them not so great. I use the somewhat clumsy XBoard with a variety of engines for the sake of analysis, but using it for correspondence is far from ideal. This task seems the perfect opportunity to demonstrate that less is more, and create a CLI interface which acts as a somewhat dumb client for displaying a board and interpreting moves. While I will probably never actually code this, I hope that perhaps I will some day, and I will call it scorch for Simple Correspondence Chess.